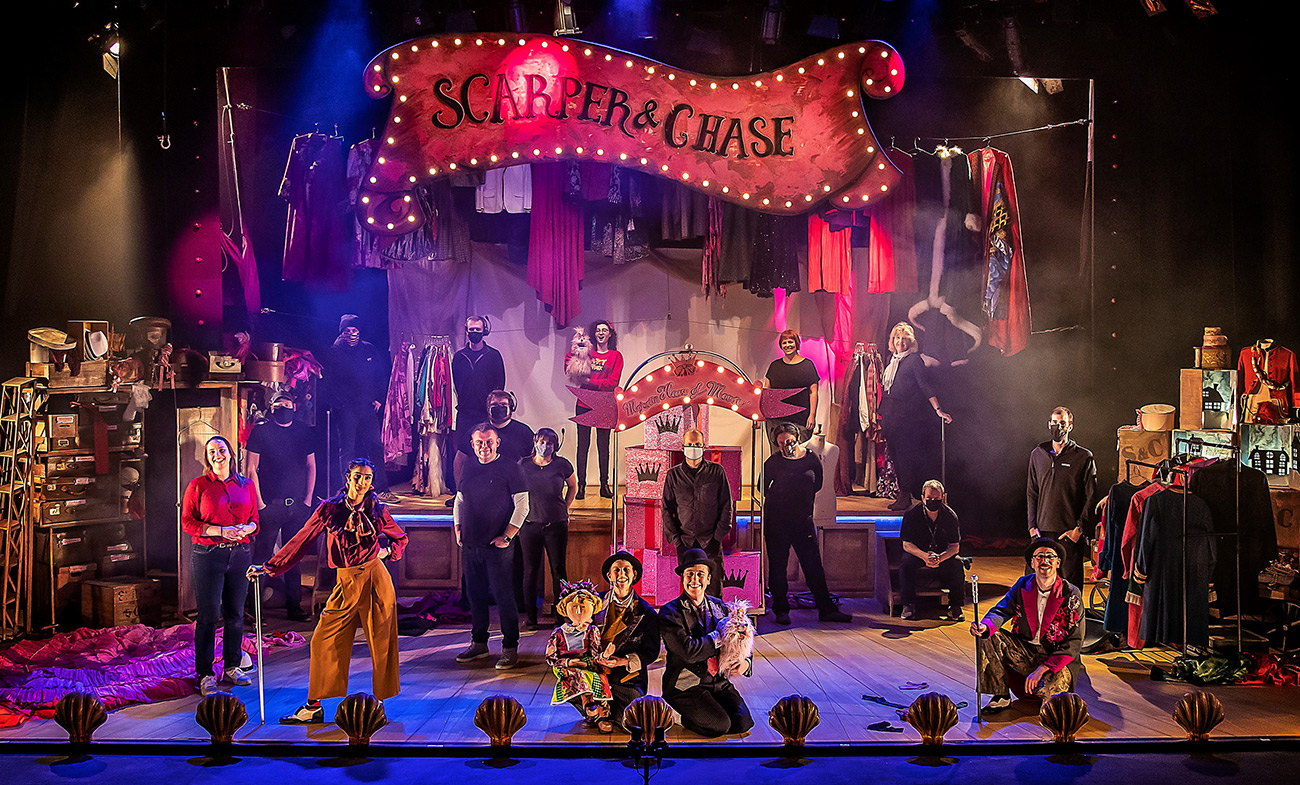 THE ROLE OF CREATIVITY IN TIMES OF CRISIS WITH LAURA LINDOW

Laura Lindow has a super power. She has been helping people to “hang on to their possibles” during the pandemic.

In the height of the pandemic and searching for a way to continue to reach communities through theatre, Laura wrote the Northern Stage online Christmas show, The Emperor’s New Clothes. O’s creative director sat down with Laura, an award-winning theatre writer and director for a coffee and a natter about how theatre has changed over the pandemic, her very serious work as a Clown Doctor and why creativity is more important now than ever.

Born in Edinburgh, Laura is a graduate of Northumbria University and has lived in the North East for many years, developing a “gradual but thumping love affair with the region”. In her 20 years of
making theatre she has gained a reputation for creating “punchy work with a serious sense of play”.

“When we had the first conversations (Director Mark Calvert, collaborators Kitchen Zoo and myself), we didn’t know what that show was going to look like, we didn’t know how we were going to be able to realise it together, whether the show could be live or not. We all felt very keenly the sense of wanting to bring some hope and joy – an opportunity to escape to the performance, and to really reach people. As a team it was also important to honour the tradition for people who make a Christmas show part of their festivities, but it also gave us the opportunity to create a new tradition for audiences who maybe haven’t been part of that magic before. Looking at the numbers of children and families that the show reached is just staggering.”

With the show being recorded and no audience present, the production of the show was a totally different experience for Laura and the team, who are used to feeding off a crowd.

“It could have felt very, very odd”, she admits. “We couldn’t play composer (and King) Jeremy Bradfield’s music live because the show was being recorded, and there was of course no audience. We had to keep the energy levels high, high enough to reach out through the screen to the people watching at home. Meerkat Films were so skilled – it was their job to capture not just the images but the essence of what was happening onstage, which they did brilliantly. Even though it was being filmed we wanted it to keep its authenticity as a piece of theatre. You’ll notice there are no shortcuts, no cheating with clearing the stage between shots – we had people tripping over piles of socks in the final recording, but that meant that you could really travel with the actors and the characters through their story.”

Writing isn’t the only thing that has kept Laura busy during lockdown, she’s joined forces with other creatives in the North East to make sure that her community stays connected and positive during what has been an exceptionally turbulent year for the industry and freelance professionals.

“Alongside Zoe Cooper and Gez Casey, I started the North East Playwrights Network. It was so important to try and maintain those links between creatives in the region, even if it was just appearing as faces on one another’s screens, it gave us a chance to reach out and check in on each other. All sorts of companies and individuals really stepped up over the lockdown to produce incredible things, working so hard to keep creating opportunities for the future of our industry, whatever that might look like.” When she’s not writing and producing for the stage, Laura swaps her normal attire for
a doctor’s coat and red nose, transforming into her alter-ego Dr Lulu McDoo, one of the North East’s Clown Doctors for Tin Arts, bringing joy to sick children on the wards of The Freeman and Great North Children’s Hospital, using play and a little bit of silliness to support them through what can be a traumatic and frightening time.

“I live and breathe my work. It was important to me to keep going and keep creating during 2020. The first thing was the Clown Doctoring because it was so urgent to keep reaching those children and their families. It wasn’t just that we were able to create through lockdown, rather it felt essential to keep going in order to support people during this time.

“As Clown Doctors we work with children to whom the world feels strange and peculiar, even impossible… but sometimes impossible is the only thing that can possibly happen! Sometimes the impossible is where the possible just gets going. And this idea of hanging onto what’s possible fed into all of the other work that we were producing.”

Thinking about the place of creativity during the pandemic, Laura ponders, “It’s interesting because when theatre and culture was getting an economic pummelling, people were automatically reaching for art. Through theatre you can reach out and help one another, keep someone company through loneliness that they
may be facing.”